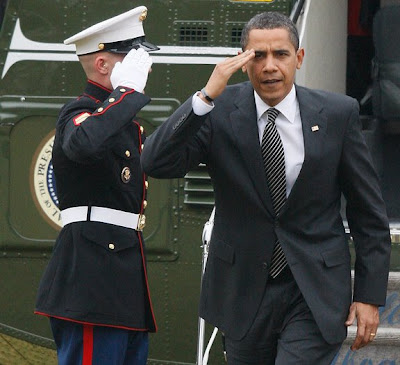 For some reason EVERY single time I see Poppa salute comin off of Marine-One, it really drives home that he is the President of the United States of America. The fact that we as a collective whole, elected a black man as President is still an amazing thing for our country.
There are a billion backward ass FULLY racist clowns that are still demanding a recount even though he buried McCain.
I watched his address tonight, and we are so very lucky that at this time in our history, we have a man who can articulate things in a way so that I personally don’t feel so freaked out.
With the exception of the F.D.R. and Lincoln administrations, no President has gotten a systematically shittier hand dealt to him like he has. And when he talks, I feel like he pays that no mind, and the MASSIVE amount of problems we have on VARIOUS fronts, is just “par for the course” for him.

He really is emulating the idea that “the only thing we have to fear, is fear itself”.

And because of the way he speaks to us, the manner in which he can articulate himself and his plans and his ideas, I straight up fuckin believe him when he says we are gonna be ok.

Poppa, I don’t care if you are the color orange.

Thanks for bein Poppa.

Now get back to work.