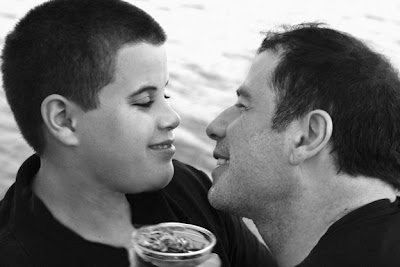 When stuff like this happens, and the overwhelming humanity of things gets so crystal clear that you wanna throw the fuck up, I catch a massive amount of tolerance, and sympathy.
This pic here is just a straight up haunt.
The love between these two here is just undeniable.
J.T. is so ripe for a monster blogrant here, and I just will refuse to ever do it. Purely because of what has recently happened.

It’s been so sickening to read these dumb comic books like US and In TOUCH try and craftily seem like they are bein sympathetic, all the while tryin to leak any kind of weird or juicy strange tidbit about this whole unGODly sad and tragic deal.

Even in the darkest of personal moments, they show no remorse in exploiting these people.

From a man who has a 16yr old, and who is imbalanced enough to go on a killing spree if this happened to me…..

I wish the Travoltas peace.