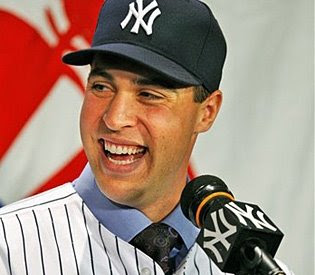 You now play for my favorite team. And I fuckin hate you.
The New York Yankees in the last couple of months have committed to over 423 million dollars for THREE fucking players.
And this is GUARANTEED MONEY. If any of these fuckin punks gets a career ending injury they still get the dough.
SOMETHING has to be done.
We are in the worst financial state in America since The Great Depression, and these dudes are hog living like it’s no tommorra.
It’s fucking infuriating.
The complete idolotry of athletes, especially in this “American Pastime Snoozefest” that baseball is, is a fuckin joke.
The only guys who earn their money are football players, and they get paid far less, and have an average career lifespan of 3 years.
I know this is about business, and baseball players havin an amazing union, but man it’s become beyond outta control.
I can’t STAND my baseball team, and I can’t do anything about it. I’m no fuckin turncoat.
So I may just quit fuckin watchin or carin.
Maybe if enough of us do this, and enough of us quit goin, and watchin, and buyin, we could bring this back to just insane. Rather than Beyond LUNACY.
But that’s not gonna happen. Especially now.
Because more than ever, escapism is at a century wide high.
I hope a 6000 pound anvil gets dropped on your head Mark.
And my team, the Yankees, are fuckin jerkoffs.