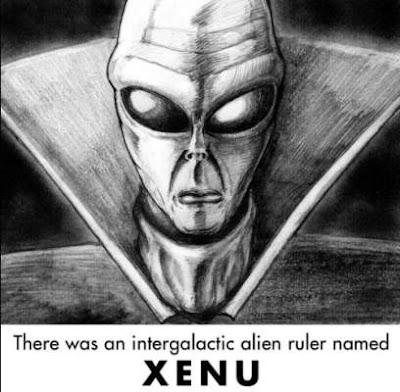 Bear with me you rascally bunch of space travellers. I’m new.
Your “God” is an intergalactic alien named Xenu? And you wanna hook me up to a machine that registers and counts the number of “Body Thetans” in me, which are supposedly blocking me from ole Xenage himself?
And as I “level-up” I get the glorius opportunity to pay thousands more and more for each level I reach?
And there are wacky tales about cruise ships full of Zombies you are breaking down to “work” at the Headquarters to spread the word.
I live seconds away from a lot of Alien “centers” and the worker bees seem to be dressed up in a standard uniform that reminds me of them freaky soldiers in the movie “The Wall” from Pink Floyd.
Lemme just start by saying, YOU FUCKERS ARE WEIRD AS IT GETS!!! Like, well, “other world” weird.
At my age, I really try to come from a place of tryin to see it the other persons way. But you fuckin BeezlyBobs are just way too out there for me. Period. It’s spooky and culty and so far gone, that it’s impossible for me to even start to open my mind. First, because I don’t want that machine you got droppin any Space Invaders into my noodle. And second, well, it’s just too fuckin creepy.
BUT HERE’S THE RUB>>>>>>>>>>>>>>>>>>>>>>>>>>>>>>>>>>>>>>>>>>>>>>>>>>>>>

I know a lot of Scientologists, and virtually (space term) all of them seem to be pretty well-adjusted folk, who lean heavily on takin responsibility for their behavior, and desperately tryin to seek out from within how to be a more functional, inspirational, evolved, outta self creature.
They seem to be pretty happy folk, who are in an eternal mode of not personalizing other peopl’s behavior or where other people are comin from. They seem to wanna allow people to have their own experiences, and they aren’t real interested in bein controlling judgemental creeps.

So, that bein said, far be it from me to say what is or isn’t good for any individual.
To each his very own. And I mean this.
The Celoeb marketing to try and grow membership sucks ass, and I believe that like anything spiritual, that self-promotion attached to the human condition is a dumb move, and ultimately will hurt them. But I’m not in charge of their marketing department.

And keep that fuckin xbox mind meld machine away from me…..