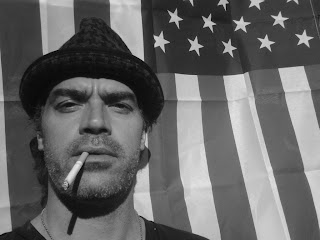 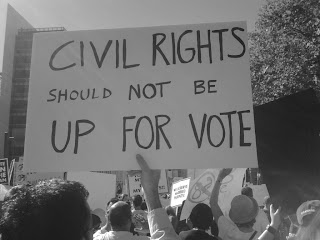 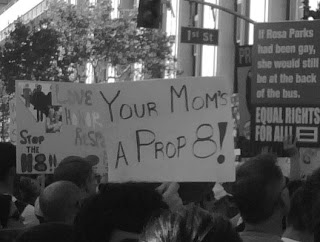 I took to the streets yesterday and practiced my right as a citizen of California to march and show my resistance to this ridiculous, and more importantly UNJUST Prop. 8 ruling.
For those of you that have just returned from a voyage to Mars and aren’t familiar with Californoa Proposition 8, it was a measure to ban same-sex marriage. And it passed. By a decent margin. Which is a drag for a lotta reasons. And none of them are personal to my life, but affect me deeply when I see close, personal, Gasp! GAY friends, that have been denied basic civil rights, because, evidently a fair number of Californians still see homosexuality as a behavioral disorder, or personal conduct CHOICE. This is ridiculous.
I have news for you. Living in LA, I have met some of the GAYEST people imaginable. AND I mean fuckin GAY. Half-shirt, jean short, full ass strutting, flambuoyant super freaks, that are happier than a 3 yr old at Xmas, all the time. REAL MEN ISO MEN types, that have spent a lifetime starin at a girl the way that I would stare at a lawn mower when I was 15 and hadn’t mowed the yard in a month.
I have been nestled near these “types of Gays” for years in clubs, on the streets, and have been routinely “swooped” on by them in the desperate hope that I can be “had”. From what I understand, this is a fun “challenge” for some “sects of gays”. I have shared water glasses, pounded shots, eatin from the evil forks of gays, and guess what….. NOTHING!!! Not a gay germ to be found. No desire after spending time with homosexuals to wanna swallow cock. JUST FUCKIN NOTHIN MAN!!
Now, in defense of all the “Evangelical Righties”, what you don’t know or don’t have experience with can be scary. I come from a VEHEMENTLY anti-gay state, Nebraska. When I was a kid, I actually, in my “Ignoramus Period”, would drive down with my childhood friends to the “Gay Area” of Omaha, which was all of a whole entire small town block, and throw eggs and shit. Which, I would imagine, be considered “gay-bashing” which absolutely sucks that I was apart of. But to make my point, IT WAS ALL I HAD BEEN INFORMED OF. MY LACK OF EXPERIENCE AND INFORMATION, COUPLED WITH NO REAL CLEAR, PROGRESSIVE ROLE MODELS. It’s the human condition to be afraid of what you don’t understand. And it even furthers the point, that racism and ignorance are learned, sometimes from a lack of learning. No one is born with these social precepts ingrained, and luckily enough for me, I was able to re-learn from experience, that being gay has nothing to do with a choice. And even if it would be a “choice” it’s a personal choice that has no bearing on whether people should have inalineable rights. I believe there are three that every American gets. The right to life, liberty, and the PURSUIT OF HAPPINESS. California is in FULL BREACH of right 3from my fuckin scorecard.
Lemme finish…..
If you are afraid of gay people, purely because they are gay, do yourself a favor and go hug a gay. I mean really fuckin get in there and bearstyle it. Then buy a cup of coffee and ask a trillion questions about what bein gay is all about. LEARN from each other’s differences, have a communicative dialogue about your fears, and maybe open your ears to their struggle…… I think it’s called….
bein CIVIL.