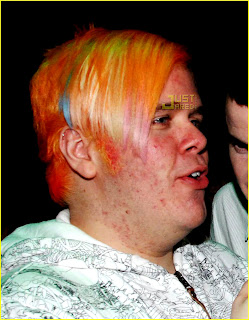 There are so many people that coulda owned the maiden slot on my blog. I just figured I would start with the worst imaginable creature there is.
Now before you get in a crazed hate-for-all about my use of the dirty word “faggot” let’s just assume, for the sake of assuming, that it has slipped outta most everyone’s mouth on Earth. For me, the word is wrong and shouldn’t be used lightly. It is denegrating and completely disrespectful to use, and is EXACTLY why I’m using it for this fame-starved, malicious, evil little kid.
More than anything, I want his parents to be locked up, and stripped of any ability to spawn again.
This contradictory little vermin was not born a completely insecure, mean-spirited human, he got that way because of the lack of any type of parenting.
When young “Poached Hilton” was bein repeatedly picked on, and beaten up in school, his parents shoulda had some therapy and counseling at the ready. Unfortunately, for us, this didn’t happen, and we now have this unshowered blythe to deal with.
I had the “pleasure” of watching young “Poached” sit grimily at a coffee bean on Sunset and Fairfax, toiling away, alone in a corner on his computer. Had I known that he was pecking away in anonymity firing off cheapshots and malicious innuendo in the unfair obscurity of the web, I woulda saved us all, and quietly walked and grabbed the power chord to his Mac, and strangled him Jabba the Hut style right there. For not doing this I apologize.
Getting to the point of this rant, It’s speaks volumes that he has become clearly viable and important to media. “Poached” quite simply speaks to the worst possible traits in all of us. And just as he at least was hidden by the anonymity of the Intrawig, we also can look at his site and not tell anyone we do.
I was a rare visitor, until recently he took a mean spirited shot by calling a celebs kid ugly. Clearly “Poached” has done nothing to rectify his fucked up childhood, and is just repeating the same behavior.
Am I a saint, NO. Will I make fun of people at times, YES. Will it even be biting, YES. Do some celebs ask for blog beatings, YES.
But kids don’t.
There is a standing 10k reward for anyone who brings me “Poached” Hilton’s nuts in a jar. Word.